The UN’s Sustainable Development Goals describe gender equality as not only a fundamental human right, but a necessary foundation for a peaceful, prosperous, and sustainable world. Progress has been made over the years to tackle gender inequality – there are more girls than ever before in school and over the past decade 274 legal and regulatory reforms were enacted in 131 countries, however, there is still a long way to go. On the political front women account for only 25% of parliament seats, two thirds of those experiencing poverty are women and 1 in 3 women experience physical or sexual violence by an intimate or non-intimate partner. 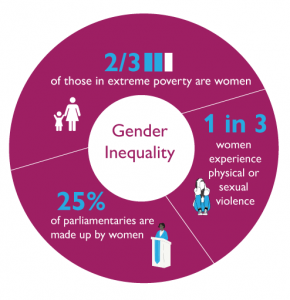 On International Women’s Day we share a story of resilience, strength, and courage of a woman whose world was pulled apart in just one night.

Zainab Bibi from the Muzaffargarh district in Pakistan, a widowed woman with eight children had a good life with her husband before he died. They owned a home and a store with her husband earning a decent living for them.

Zainab’s Story:
Following the death of my husband, his parents and brothers loaded into the house and shop and took all we had. Just like that, we became homeless. I was left widowed with eight children – five boys and three girls all under the age of eighteen with nowhere to live. It only took one night and suddenly we were completely vulnerable, we stayed with one of our relatives without food for days.

One day I went to a community meeting at my neighbour’s invitation, and it was the turning point of my life. The meeting was about the inheritance rights of women and children. After the meeting, the organisers distributed booklets which I took home. My eldest son could read and write and was able to tell me that according to these booklets we had a legal right to my husband’s house and shop.

I went back to my neighbour’s house with my son, and I asked her to help us get our inheritance. She was a kind lady and led us to a legal assistance group which filed a court case and after two years we successfully received our inheritance rights.Now my young children go to school and we have enough income to live a dignified life – all because of one community awareness meeting which gave me the opportunity to discover and exercise my rights.